The well-known Swedish slots studio, Quickspin, has delighted us with their latest release which features epic characters of the mythical king Arthur and powerful wizard Merlin, in celebration of the world-famous noble legend. Working as part of the Playtech Group Company, Quickspin has brought to life the magnificent story about bravery, magic and justice to life once again in form of a spectacular video slot for this mid-November release.

The King Arthur symbol has the power to expand into a 3×3 Wild symbol and take the player onto an unforgettable medieval adventure packed with huge wins and remarkable balance boosts. The Merlin symbol is the game’s Scatter and it also carries the wizardry to add more Wilds onto the screen. The Mighty Arthur slot is played across a traditional 5×3 reel set and the game was developed from scratch in the latest HTML5 technology. The graphics are stunning, and will appeal to all the lovers of the legend of the great king and his knights. 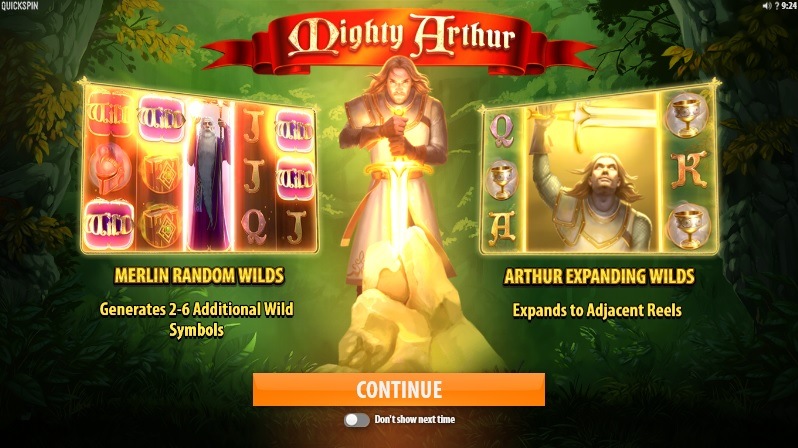 For Quickspin, a studio founded in 2011, this has been an extremely fruitful period. They’ve released successful titles such as Fairy Gate, Sticky Bandits, Wins of Fortune and Sakura Fortune; if we look back a bit more also Hot Sync and Phoenix Sun. Now, the brand has launched Mighty Arthur hoping for it to become one of their most magical slots yet. Players across numerous markets will have the chance to fight the good battle aside Arthur and Merlin, and earn some riches too, while making their way through an eye-catching storyline and gripping gameplay.