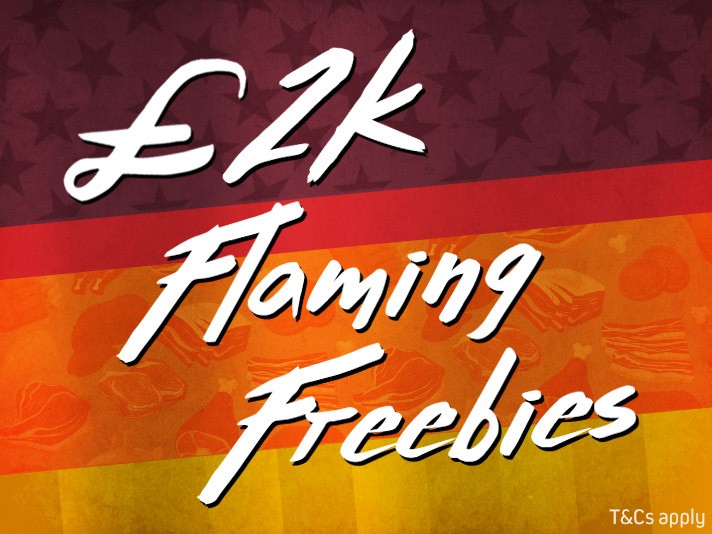 The reels of slot machines are calling out to you once more, this time from the games of Spin and Win Casino, a brand that launched back in 2011. Although the years have rolled on by since then, this Daub Alderney operated platform has continued to bring the fun, and the drama, via the red hot specials of its promotions.

Keen to shed some light on this seasoned iGaming label, we wanted to tell you all about the fantastic Flaming Freebies deal, a fiery promotion that’s only available until Sunday July 15th. We know it can be disappointing arriving to the party late, so to speak, but as this is a prize draw based offer, coming late doesn’t mean you have to rank last place. In fact, as long as you’re willing to go the distance, the large £2,000 cash prize pool can be yours, or at least some of it can. If you’re keen to get all fired up with Spin and Win, keep on reading! And if you’re not feeling it, why not take a look at the other summer offers available from countless other online casinos at the moment. We promise that you won’t be disappointed!

Those of you experienced in prize pools will likely know the format of the process by now, in which users have to collect points in order to rank higher on the leaderboard, and in turn get the more valuable prizes. It’s a simple system that rarely changes, as we can see from the £2K Flaming Freebies promo page. Despite not bringing anything particularly new to the table, this deal does allow users to get involved for a relatively small fee, with a £20 deposit being all that’s needed. Every time that amount is placed into your account, you’ll gain a point. Of course, if you have more cash to spare and are feeling brave, you can deposit the £20 and also wager at least £50, to double the amount of points you’ll receive.

To keep an eye on your progress, the promo page has a handy leaderboard, detailing what position you, and other, players are in. For those coming in with between 1 and 19 points, a split of 1,000 free spins will be gifted to you, whereas those who get 20 points or over will start getting a share of the prize pool. Ergo, the higher you climb up the board, the more cash you’ll walk away with, with those having earned over 100 points guaranteed to get a share of the £1,000 top prize.

Better still, the prizes either come with no wagering requirements at all, like that of the real money rewards, or they have only low thresholds, like that of the free spins, which is set at just x25. All spins won will be playable on the site’s NetEnt branded games only, with any progressive jackpot titles excluded. Granted, this isn’t an awe inspiring promotion the likes of which have never been seen, but for a quick influx of goodies this coming weekend, what’s not to like about it!

If you’re ready to bite the bullet, you need to visit the Flaming Freebies page and opt in to get started, with that initial deposit qualifying you. Then it’s just plain sailing until midnight on the 15th, with customers only having to wait until the next day (the 16th) for the winners to be announced.