Yggdrasil Brings Back the Magical Chibeasties with a Surprising Twist 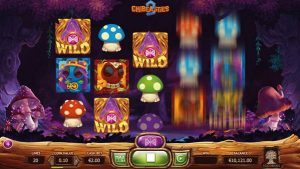 Do you remember the Chibeasties, four little creatures with enormous eyes, living in a mysterious and magical forest? They were the heroes of the 5-reel and 20-payline video slot by Yggdrasil, and whether you though them cute or possibly a bit creepy, you were surely enjoying the opportunity to spin for free up to 40 times, with randomly chosen expanding symbols helping you win more.

Well, Chibeasties are now back to share some of the new tricks they’ve learned in meantime, and we bet you’re curious to know how the sequel compares to the original. Yggdrasil has never disappointed us so far and clearly they’re not about to start now, as Nr.2 is even better than its predecessor!

“The game functionality is completely new compared to the previous Chibeasties game, and it has the great depth that can be expected from a top-quality slot”,

Chibeasties 2 takes us to the enchanted forest once again, but this time offers 4 different universes to navigate freely. Each comes with its own special wild feature, so that Wilds in the Expanding Realm will stretch to cover the entire reel, those in the Spreading Realm will create up to 4 random Wild icons, in the Teleporting Realm they’ll pick the best position to award the biggest win, and in the Mirroring Realm they’ll mirror themselves to opposite positions. Combo Wild Mutation happens randomly and is applied to all Wild symbols participating in the original feature. Chibeasties 2 also offers a free games round, same as the original, awarding up to 30 free spins with a guaranteed Combo Wild Mutation.

The new Yggdrasil video slot simply has it all – attractive visuals, good gameplay and original elements, but we’ve come to expect nothing less from a developer which has been wowing us since 2013. In 2014, the company came out with iSense cross-channel platform to ensure an equally enjoyable gaming experience on desktops and mobiles, and in 2015 they’ve launched an in-game promotional tool called Boost. Following it up with Brag social media sharing tool and Missions in 2016, Yggdrasil keeps delivering on their promise to be the innovators and game changers of the online gaming scene. This has clearly been recognised by the industry which has named them the Gaming Software Supplier of the Year 2016 at the International Gaming Awards, as well as Innovator of the Year 2017.

Before you get a chance to spin the reels of this engaging new game, check out what Chibeasties are up this time by watching the company’s trailer.