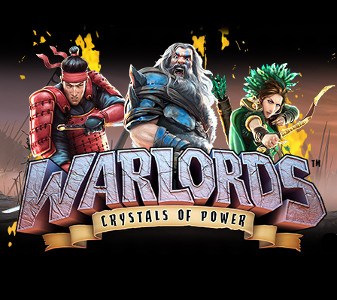 It’s always an exciting time when an online slot developer releases a new game. And we’re constantly on the look out for the next intriguing Netent product. And here it is. Gamers, make way for the Warlords: Crystals of Power online slot offering! Set to hit our computer screens on November 24th, this one is sure to provide an enticing game. Netent are already widely known for their impeccable range of high quality graphics. And you’ll find that these graphics also appear in this game, ensuring a visually pleasing experience is had by all.

The overall theme of this game centres around three different warlords, their spirit animals and the crystals that they hold. There’s the red samurai warrior who always has his wolf by his side to begin with. Joining him is a female battle maiden with a black panther as her animal and a Viking-like man with a warthog. These are the game’s three main characters. You’ll also find that each of the characters’ animal appears as a separate icon on the reels. It is these warriors who lead their respective factions into battle against each other, each vying for control of the land they live in. A completely intriguing theme, for sure, and featuring some impressive gameplay.

The overall layout of the game will feature five reels and three rows, so it’s nothing specifically different in terms of its general interface. Paylines are set in place at 30, so you cannot adjust these in any way. You’ll have the chance to alter the wager that you place by using the relevant buttons. These can be found at the bottom of the reels. However, perhaps the most outstanding features of this game are its special additions.

To begin with, you’ll find that Warlords: Crystals of Power has three different wild features. Of course, wilds always substitute for any other symbol on the reels in order to form a win. This is just the basic feature of such though. However, the three different wild features relate to each of the faction leaders. The Viking man can slam his hammer down and create a block of four wilds in one location. The samurai is able to slash the reels diagonally, placing wilds in the position of the slash. Meanwhile, the sorceress can fire arrows into random locations, turning icons wild.

Meanwhile, you can collect scatter icons – which are in the form of the different faction flags – to enter battle. This means that you’re given the chance to access the freespins round of the game. Due to there being three factions, you’re able to access one of three different freespins rounds! This sees each of the warriors go into battle and force wilds to appear on the reels during each spin. You’re also able to gain additional freespins and multipliers throughout.

Don’t worry if you’re anxious to start spinning the reels of this one. It will be available soon. As we said, you’ll be able to begin playing it on the 24th November. It has beautiful graphics, entertaining gameplay and intriguing special features all in one single game. Yes, we believe that Netent have made yet another amazing offering in Warlords: Crystals of Power.