Online casino game developers often reach out to movies to find inspiration for their slots. But there are also a lot of movies with stories build around the world of gambling. We’ve chosen the top 10 which, being a casino games fan, you’re likely to enjoy seeing. 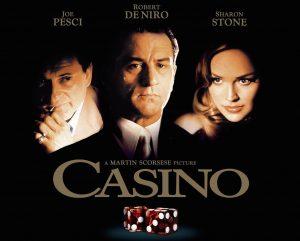 De Niro stars as Sam “Ace” Rothstein, a character based on Frank “Lefty” Rosenthal who ran several casinos in Las Vegas during the 1970s. In the movie, De Niro is called in by the Italian mob to manage the operations at the Tangiers Casino in Vegas, and his friend Nicky Santoro, played by Pesci, sent to protect him and the operation. Each of the two have a tragic flaw: Sam falls in love and marries a hustler, and Nicky falls victim to drugs and violence. The second part of the film portrays the pair’s downfall as they get simultaneously targeted by the FBI, angry mob bosses and the government. Among other things, the movie addresses casino cheating, demonstrating how it was dealt with by an incident with a Blackjack player. Having been jabbed with stunt guns by casino security, he’s taken to a separate room where his fingers get pounded with a mallet until he admits his grave mistake.

Film was shot in Riviera Hotel & Casino in Las Vegas, based on the screenplay written by Nicholas Pileggi. It was a huge box office success and got Sharon Stone Golden Globe Award for Best Actress in a Motion Picture – Drama. 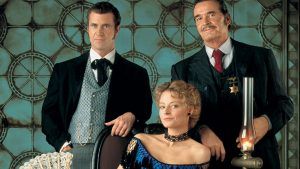 Another impressive set of actors appears in 1994 movie Maverick, directed by Richard Donner. Unlike Casino, this one is a western comedy starring Mel Gibson as Bret Maverick, a card player trying to collect money to enter a five-card draw poker tournament. On the way he meets another con-artist, Mrs. Annabelle Bransford played by Jodie Foster, and a lawman Marshal Zane Cooper (James Garner), who both join him in his adventure. Having experienced numerous mishaps and challenges, conning a Grand Duke gets them the money they need to enter the tournament. At the final table, Maverick wins with an unbeatable royal flush, having called without looking at his final card. The plot continues as the $500,000 reward switches hand a few times, ending with half in possession of Maverick and Cooper who turn out to be father and son, and who have actually conspired all along to collect the grand prize. 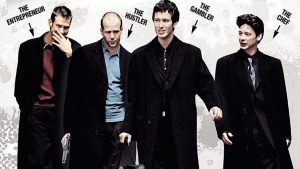 The 1998 British crime comedy film, written and directed by Guy Ritchie, follows a young card shark Eddy (Nick Moran) who loses £500,000 in a rigged high-stakes game of three card brag. To pay off his debt to the powerful crime lord, he and his friends decide to rob the neighbors, a small-time gang planning to raid some cannabis growers. As the result, they end up with a sack full of money and a van filled with marijuana bags. The group decides to keep the cash but make a mistake trying to sell the drugs to their original owner. As all hell breaks loose and dead body count spirals out of control, Eddy and his buddies try to find a way out before they too fall victims to the violence. And where do the two smoking barrels come in? Initially stolen by order of the above mentioned crime lord, a couple of antique shotguns are mistakenly sold to the wrong person and end up with Eddy’s group. Trying to get rid of all evidence, they decide to chuck them away before realising the guns are worth a fortune. 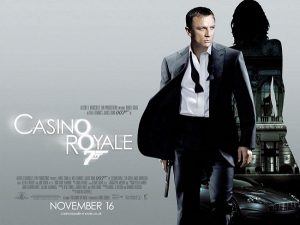 Directed by Martin Campbell, the 2006 Bond movie stars Daniel Craig as the legendary MI6 agent and Judi Dench as MI6 chief M. When the terrorist financier, Le Chiffre, goes bankrupt, he decides to set up a high-stakes Texas Hold ’em tournament to recoup the money. Bond is given $10 million needed to join the tournament in the hope that losing will give Le Chiffre no choice but to seek asylum with the British government. Bond loses his initial stake but is backed by a CIA agent on the same mission, and the tournament ends with a 150-million hand and all players going all in. Guess who won! Well of course, it was the unbeatable MI6 agent who managed to produce the highest hand consisting of a straight flush.

A 1965 movie directed by Norman Jewison tells a story about an up-and-coming poker player, the Cincinnati Kid (Steve McQueen) who tries to claim the fame in a high-stakes match against Lancey “The Man” Howard, a long-time champion. The game ends with a climatic hand being played between the two. It starts off by Howard being dealt an 8 of Diamonds, and the Kid 10 of Spades, after which the latter bets $500 and The Man calls. Howard then gets Queen of Diamonds and the Kid 10 of Clubs. He bets $1,000, and calls after Howard raises another $1,000. Next, Howard receives 10 of Diamonds and the Kid gets the Ace of Spades, betting $3,000 and the Man calling it. Howard’s final card is 9 of Diamonds, and the Kids’ Ace of Clubs. Having gone all in and receiving their last cards, Jack Diamonds for the Man and the Ace of Hearts for the Kid, the young challenger beats Howard’s queen-high straight flush with a full house of Aces and 10’s. What a game, right? 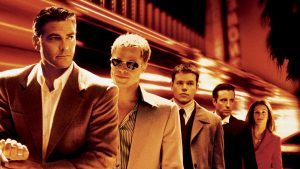 Danny Ocean and his 11 partners conspire to rob three Las Vegas casinos simultaneously in this 2001 movie directed by Steven Soderbergh. An impressive cast includes George Clooney, Brad Pitt, Julia Roberts, Elliot Gould, Matt Damon, and Carl Reiner.
Targeted casinos are the Bellagio, the Mirage and the MGM Grand, all three owned by Terry Benedict (Andy Garcia). To spice things up, Danny’s ex-wife Tess is now Benedict’s girlfriend. A clever plan is put in place and the gang manages to walk away with about $150 million in cash. As Danny was paroled after a sentence for felony fraud conviction, he is now arrested for violating the parole by being in Las Vegas. But when he comes out of the prison, guess who’s there to meet him? A truly happy end, as the hero gets both the cash and the girl. By the way, did you know this movie is actually a remake of the 1960 Rat Pack film of the same name?

This 1998 American drama, directed by John Dahl, takes us to the underground world of high-stakes poker. Matt Damon (him again!) is Mike, a law student who dreams of playing in the WSOP. However, he manages to lose his entire $30,000 bankroll against the Russian mobster Teddy “KGB” (John Malkovich) in a game of Texas Hold’em, after which he promises never to play poker again. Mike manages to keep his promise until his childhood friend Lester “Worm” Murphy (Edward Norton) gets out of prison, heavily indebted. Trying to help Worm meet a five-day deadline to pay off his debt, Mike joins him in several card games and the pair do well until Worm is caught cheating, which is when they both get beaten and their money taken. With the help of a $10,000 loan from a professor, Mike challenges Tedy KGB to another game, and at the end of a long night manages to spot a “tell” which allows him to win.

Does he pay off the debts and go back to the law school? No, he does not! Instead, Mike drops out, says goodbye to his girlfriend and makes his way to Las Vegas. Btw, the term “rounder” is used to describe a person who travels from city to city seeking high-stakes cash games. 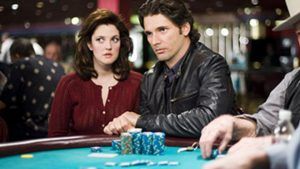 The 2007 drama, directed by Curtis Hanson and shot on location in Las Vegas, stars Eric Bana as a talented poker player in need of $10,000 to get a seat in the World Series of Poker Main Event. His estranged father L.C. Cheever (Robert Duvall) is a two-time WSOP Champion, who has taught his son to play on the kitchen table with “pennies, nickels, and dimes.” Having found the money, Huck finds himself facing his father at the final table of nine, and a showdown between the two finishes with Huck deliberately folding a winning hand and ending up third. Dad loses his title to a player who has won the entry via an online satellite (wink, wink, Chris Moneymaker), but the relationship between the father and the son is restored as they engage in a one-on-one rematch playing with pennies, nickels, and dimes. 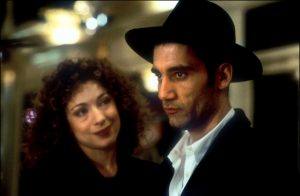 Jack Manfred (Clive Owen) is an aspiring writer not managing to make ends meet. So he gets himself a job as a croupier, but it starts taking over his life. He’s out drinking with a cheating fellow croupier, sleeps with another, and ruins the relationship with his girlfriend. Jani, a gambler down on her luck, asks him to be the inside man for a planned casino robbery. It finishes badly in more ways than one; Jack gets beaten and his girlfriend killed in an apparent hit-and-run. He writes a book about a cold, unfeeling croupier and it achieves a big success; however, he continues doing the same job and makes absolutely no changes in his life. This 1998 neo-noir directed by Mike Hodges received positive ratings and was acknowledged for the realistic depiction of the casino. 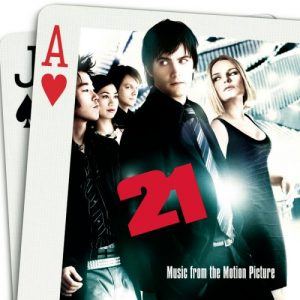 “21” is a 2008 movie directed by Robert Luketic and based on a true story. It follows Ben Campbell (Jim Sturgess), a Boston MIT student who wants to transfer to Harvard School of Medicine but can’t afford the $300,000 scholarship fee. His math professor Micky Rosa introduces him into a club of students he teaches the skill of card counting at blackjack. Weekend trips to Las Vegas enable Ben to earn hundreds of thousands of dollars, but distracted by blackjack, he fails to complete one of his classes and, therefore, will not graduate. What’s more, all his winnings have been stolen from his room. The movie ends with Ben having an interview with the Harvard director, telling him the entire story. An interesting way to gain admittance, right?