We can’t imagine that there’s a single person out there who doesn’t love Christmas. The decorating of houses. The excitement of Christmas Eve leading into the day itself. Opening gifts. Eating a hearty Christmas Day meal. And don’t forget about the multitude of songs that include their own Christmassy elements. However, one other thing that is really great to do around Christmastime, is play slot games. And, of course, there are many of these that feature the winter holiday as their main theme. Fortunately, we know which of them are of the very best quality. So, whether you’re a fan of special features, intriguing graphics, exciting gameplay or apt soundtracks, read on. We have constructed this list of the best collection of Christmas slot games for you to browse through.

If, like us, you have a bit of intrigue in playing classic slot games at times, then Jingle Bells is the one for you. The Microgaming company have brought the traditional slot game layout together with the Christmas theme in this offering. The reels feature imagery such as festive bells and sprigs of holly. Joining them are regular icons, like BARs and 7s. And, in fact, the game’s bell symbols act as wilds at the same time. Therefore, you’re able to form winning combinations easier. Should you spin three wilds into a diagonal position from bottom left to top right of the reels, a maximum pay out of 6,000 coins can be won. Of course, the game also incorporates a traditional three reel layout and five separate pay lines. RTP: 94.95% (quite low)

95.38% Payout Percentage
Another Microgaming offering, Deck the Halls provides a considerably more festive appearance to gamers. Its five reel and three row layout includes several different icons. These exist in the form of symbols such as different decorative baubles, a turkey, a Christmas tree and various gifts. You’re able to place a maximum overall wager of £75 per spin and there are 30 pay lines in the game. It has several different specialities, such as its own wild icon. This is that of the game’s own logo. Meanwhile, the symbol of the bells is a scatter icon. Three, four or five of these coming into view in any location reward you with 10 freespins of the reels. Not only that, but all freespin wins receive a double multiplier. The Santa Claus icon, meanwhile, appears in stacks during both the base game and freespins.

While this is another game on offer from Microgaming, it doesn’t have the sharpness of the previous one on this list. Instead, it features a blue background and its icons are a little flatter in appearance. This doesn’t mean that it’s not a great game though. Incorporating symbols of candy canes, Santa’s sleigh, gingerbread men and cups of egg nog, Ho Ho Ho will surely have you in the seasonal spirit in an instant. The symbol of Santa himself works as the game’s wild, substituting for all others on the reels. Meanwhile, the gift box is the scatter icon. Should three, four or five of these come into view on the reels, you’ll receive 20 freespins in total. All wins during this round will also receive a double multiplier. And don’t forget about the game’s gamble feature either! RTP: 95.90%

This game, brought to your computer screens by Realtime Gaming, provides a nicely enhanced offering. It includes wonderful graphics and appealing gameplay. Gift-wrapped A, K, Q, J, 10 and 9 icons exist on the reels initially. However, accompanying these are icons of Santa and an elf tied up. Meanwhile, another elf is caught in an ice cube! Alongside these, you’ll find a symbol of a bomb, which works as the game’s scatter icon. These provide a pay out wherever they show up on the reels and will multiply your total bet by up to times 20. Finally, the icon of Rudolph himself provides the game’s wild symbol. And, furthermore, if you spin five of them on to a winning pay line, you will receive a jackpot pay out!

The jingling bells and festive cheer are both present in Santa Surprise, brought to you by Playtech. It features a simple five reel and three row layout, but it has tons of fun features within. The symbols of the game exist in the form of things like gift boxes, stockings, wreaths and bells. Not only that, but Santa Claus himself will provide you with a wild feature. This sees him substitute for all other icons in order to form a win, except scatters and bonus symbols. The scatter is the icon of the snow-topped house. Three or more of these coming in to view will provide you with 10 freespins with a triple multiplier. Finally, the Christmas tree is the bonus icon and you need to spin three or more of these to trigger the bonus round. This sees you choose gifts from around the tree to reveal cash prizes! RTP: 97.05% (very good!) 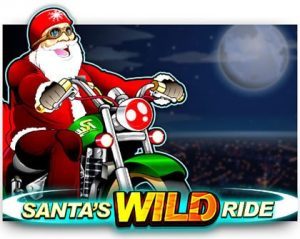 Santa’s Wild Ride, meanwhile, is another offering from Microgaming. This one provides players with a total of 243 different ways to win. It also incorporates some of the highest quality graphics, especially when it comes to its symbols. These are present in the form of items like mince pies, a Christmas pudding and some cookies. However, the game takes a wild twist, depicting Santa as a bike-rider. Not only that, but the elves seem to work with power tools, while Mrs. Santa is a babe in his sleigh. There’s a wild icon in the game, which also awards a random multiplier. The keys to Santa’s motorbike provide the game with its scatter, providing pay outs in any location. Furthermore, three or more of these symbols in view will activate the freespins round. This round sees you able to choose between three different additional features.

It’s clear that this game is another Realtime Gaming offering, as it utilises the same icons of gift-wrapped letter and number symbols. However, there’s also the inclusion of a Christmas pudding, Santa’s naughty list and a jet-powered sleigh. It’s a game with five reels and features a maximum bet level of 50 coins. It also incorporates two different wild icons in the form of Santa and Rudolph. These substitute for all symbols, except for good elves and bad elves. These two forms of icons provide the game with its scatters. Three or more good elves trigger either ‘Jackpot Spins’ or the ‘Santa Strikes Back’ feature. Meanwhile, three bad elf icons activate the ‘Rudolph’s Revenge!’ or the ‘Rudolph’s Rampage’ round.

We all know the tale of Scrooge, right? Well, this game borrows directly from the story. You’ll spin the five reel and three row game while Scrooge watches on from the sidelines. Of course, in the story, the titular character receives visits from three different ghosts. It’s these characters that are present on the reels as icons. Scrooge’s friend Marley is also on the reels, providing a scatter symbol, which can trigger up to 15 freespins. The clock works as a bonus symbol, triggering the bonus round when three or more come into view on an active pay line. Finally, Scrooge is the icon that works as the wild symbol, substituting for all others. The only exceptions to this are the scatter and bonus icons. It’s also a graphically superior offering in the slots genre. RTP: 92.3% (quite low)