Spin and Win keeps coming up with attractive new promotional deals to reward you for what you’re likely doing anyway – playing your favourite games for cash. This time players are being invited to join Sword of Destiny Tournament, cross swords with other gamers competing for a champion title, and as the result potentially share £5,000 prize pool. Are you up for the challenge?

Sword of Destiny Tournament lasts from 13th until 16th November, but the sooner you join in, the better are your chances of ending up one of the winners. To participate, one needs to opt in through the promotion page and start playing Sword of Destiny Slot while wagering real cash. Spin and Win will award 1 point for every £5 bonus money wagered, 3 points for £5 bets made with real cash, and 10 points for every £10 you deposit and play with. The number of accumulated points will determine your position on the leaderboard, and should you end up among top 200, you’ll receive a cash prize of between £5 and £75. Unlike in some promotions, claiming a reward in this one is not a matter of luck. You can influence your ranking whenever you wish to simply by continuing to play with real money.

SGI’s Slot of Destiny is a 5 reel slot which starts playing with 25 fixed paylines, while one of the game’s characters reigns over the reel area. This is in fact the first video slot featuring X-Zone game engine.

There are 4 features which can be randomly triggered and add two additional rows and 25 new paylines: Clumped Wilds which fill as many as 3 rows with an expanded Wild icon, Random Wilds turning 4 to 9 position Wilds, Picture Wilds covering adjacent reels, and Upgraded Symbols feature which transforms at least 2 low-value icons into one of 3 high-value ones. 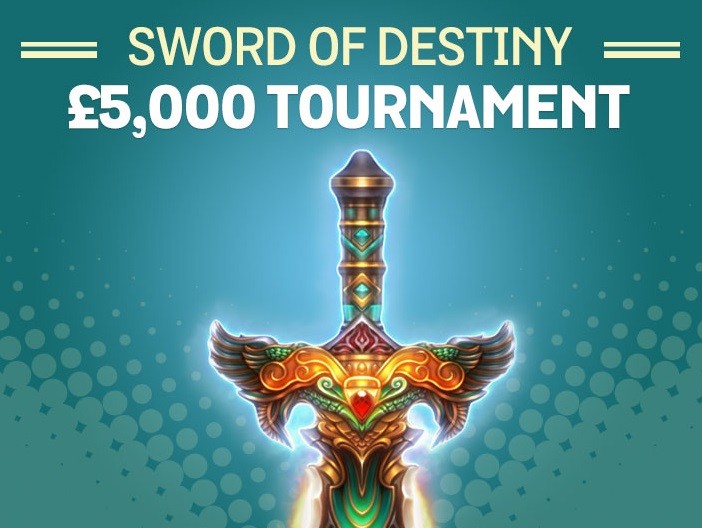 Landing 3 or more X-Zone symbols initiates 8 Free Spins with each win multiplied by up to x10, and potential extra spins awarded with every additional triggering symbol which lands on the reels. Temple Tower Jackpot, activated by 3 bonus icons, prompts you to climb 16 steps of a ladder by engaging in a pick & click game at every level; the higher you get, the bigger is the reward. Get lucky and you could claim a jackpot of 500x your stake.

Sword of Destiny Slot is a visually appealing game with features that can potentially lead to hefty rewards. It’s likely you’ll want to play it anyway, so decision to join the above Spin and Win promotion should be one of the easiest ones you ever had to make.