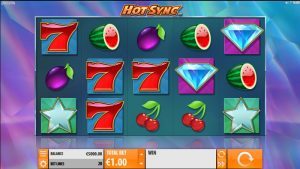 Sweden-based developer, Quickspin, has launched its newest addition to an already impressive portfolio of games.

Released on February 16th, Hot Sync brings the traditional style of Las Vegas slots – with a twist of modern in the form of game’s special features.

Three Scatter symbols will trigger the Free Spins round, with 8 free games awarded. But, the most appealing perk is the Hot Sync respin feature, which, when activated, turns the triggering reels hot – with additional Wilds available.

Daniel Lindberg, the CEO of Quickspin, is convinced the game will be very appealing to both penny punters and those looking for big payouts, because of its low to medium volatility and a chance to win up to 2848x the wager, with RTP of 96.29 percent.

Lindberg said Hot Sync was just one of the new releases we’d see this year, and also expressed his hopes the title would be just as successful as the brand’s other blockbusters. Some of the famous Quickspin titles include Dragon Shrine, Gold Lab and Spinions Beach Party.

All Quickspin’s games are developed in HTML5 and offer the highest quality of animations and soundtracks, with cross platform availability.

Quickspin is a well known and highly respected name in the world of online casino games. Founded in 2011, the software provider had become one of the leading names in the business in only couple of years and in March 2016 was bought by Playtech. With offices in Sweden and Malta, the company recently entered a highly competitive Danish market.