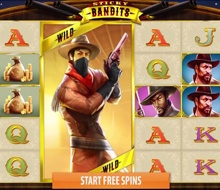 After a series of successful slot releases including Wins of Fortune, Sakura Fortune and Leprechaun Hills, the Swedish software developer Quickspin has just launched the brand new title Sticky Bandits. Themed on Western movies, the game takes players to the Wild West where a group of villains is plotting a train heist.

The game is quite unique when it comes to its structure as it uses a 5×5 grid allowing players to create winning combinations along 30 paying lines. The reels are set in a wooden frame against a rocky terrain with cacti and the railroad track on the left side of the grid. Featuring amazing graphics and smooth animations along with a thrilling Spaghetti Western soundtrack, the game will take you instantly to the canyons of the desert where the great heist is about to take place.

Although character symbols can appear in stacks to cover the reels entirely with symbols of a kind, Sticky Bandits features two more villains that steal the show. They stand for Wild and Bonus symbols and appear in blocks that can cover two reels entirely and complete multiple winning combinations at once.

Another special symbol is Train Bonus which appears only on the reel 1. You need to land the Train Bonus symbol and the Villain Wild symbol on the reels 2 or 4 to trigger 7 free spins. During free games triggering Wilds remain at their positions. What’s more, all other Wilds that appear remain sticky for the duration of the feature.

The game also features the Quickspin’s innovative Achievements Engine which provides players with more entertaining and rewarding gaming experience. During six unique game events taking place in all the Quickspin slots, the feature rewards players with tokens whenever free spins or other bonus features are triggered. Players can track their progress through 4 levels and request payouts at each level or cash in their tokens to trigger bonus features.

“Sticky Bandits promises to be yet another smash hit taking players on a rollercoaster ride across the heart of the desert”, said Quickspin CEO Daniel Lindberg and added that Achievements Engine has already proven to be very popular with players.

Sticky Bandits, developed in the HTML5 technology, is playable across all devices.

Since 2011 when it was established, Quickspin has built excellent reputation as one of the leading software developers in the world. The company was acquired by Playtech in March 2016 and today it holds licences issued by a number of trustworthy gaming authorities.