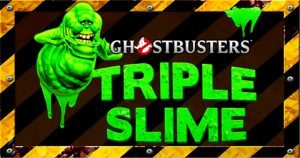 When you need to update your casino lobby, who you gonna call? – Ghostbusters! Casumo Casino knows how it’s done; the only way to fight strange things in your casino neighbourhood is to invite the goofy experts for the paranormal showcased in Ghostbusters Triple Slime video slot from IGT. Professors Spengler, Stanz and Venkman will assist you in getting rid of all the obstacles that prevent you from winning awesome prizes. All you have to do is join Casumo Casino and take pleasure in this terrific video slot.

Visit Casumo Casinoave all seen the classic movie released in 1984 which served as inspiration for the IGT-powered game. Fans of the retro blockbuster will have so much fun spinning the reels of Ghostbusters Triple Slime. The slot features 5 reels, which is a standard, but offers 720 ways to win, which is not something you see everyday on your average virtual slot machines. Instead of conventional paying lines, you have the chance to create a lot more winning combinations by matching identical symbols on adjacent reels.

The visuals of the game will blow you away and you’ll find all the iconic characters and movie props you’ve had the chance to see in one of the top action comedy flicks of the 80s. Aesthetically, Ghostbusters Triple Slime matches the atmosphere of the movie – main actors Harold Ramis, Dan Aykroyd and Bill Murray offer high payouts, but the biggest lies with five Ghostbusters logos. The Stay Puft Marshmallow Man which is the game’s Wild and you’ll see it landing on the middle reels, leaving enough room for Scatters (Slimer symbol) to activate the Slimer Scatter Bonus feature. Once triggered, the Slimer bonus round will award you with cash prizes up to 2,000 coins.

But that’s not all from the memorable IGT slot – you can also benefit from a Triple Slime Bonus feature. A combination of a pick-and-choose bonus and a multiplier round, the Triple Slime special feature can award you with 5,000 coins or boost your balance with a 10x multiplier prize. For this treat keep an eye on Bonus icons and green, purple and red wheel pointers, and most importantly – don’t be scared of ghosts! It may be a long time since you’ve hit the theatres and seen a movie as likable as Ghostbusters, but Ghostbusters Triple Slime, now available at Casumo Casino, is a great way to remember the good ol’ times and scoop up some attractive prizes.